BIG NEWS on the Merseyside music scene as The Sundowners return with a very special intimate gig at Phase One in Liverpool on Thursday 26th May at 7.30pm courtesy of EVOL. With tickets only £10 and support from Fiona Lennon and Marvin Powell, it’s set to be a gorgeous showcase in celebration of their new album Pulling Back The Night!

The Wirral folk legends and Glastonbury favourites have been busy collaborating with the likes of The Coral, The Lightning Seeds and Blossoms but now return as a duo (Fiona Skelly and Niamh Rowe) to deliver some delightful sounds in a super cool venue. Here’s our interview ahead of their much anticipated return….

LVL: Hey Fi, Niamh! It’s so great to have you back playing in Liverpool! When was the last time you played locally and what have you been up to recently?

Fi & Niamh: Hey! Thank you! We’re glad to be playing live again especially with new material. We played a secret gig in West Kirby in April but prior to that was Feb/March 2020 doing backing vocals with The Lightning Seeds. We’re really looking forward to be playing in the city again!

LVL: What has it been like working with the likes of The Coral, The Lightning Seeds and Blossoms over the past year or so?

Fi & Niamh: We love working with other artists whether it’s providing backing vocals or writing together. We’ve learnt so much over the years and each time we do a new project or collaboration it challenges us and keeps things exciting and fresh!

LVL: So what’s brought about this return and what’s this new album all about?

Fi & Niamh: We took a break after the second album ‘Cut The Master’ and did a lot of vocals live and in the studio with other groups. Alfie suggested us doing a writing session with Mike And Evelyn from Clean Cut Kid so we got in with them and wrote ‘Wonderful’ and ‘Pulling Back The Night’.

We had supported Paul Weller in the past and Alf had kept in touch. He asked what we were up to. Alf told him we were doing writing sessions and would he be up for getting in with us and he was. We went down to Surrey for a couple of days with Steve Pilgrim and had ‘A Thousand Doors’ and ‘Night Watcher’ recorded.

We didn’t know what we were going to do with the two projects so we just got into The Coral Caves with Tim Cunningham, Jim Sharrock and Paul Molloy and started recording to see what we came up with. We played what we had to James Skelly and he said he could make all the sessions work as an album in post production. We went into Parr Street with James, Chris Taylor, Jim and Tim for a couple of days and came away with a cohesive record.

LVL: There are some pretty big collabs on this new album. Very exciting indeed! How has the collab process been and how have you found working with different artists with different styles?

Fi & Niamh: Anything can happen when you collaborate with people you’ve never worked with before. I think it helps not to be too precious about ideas and remember to enjoy it. You want to walk away with something you like but if it you don’t who cares. You gave it a try. Luckily we love what we’ve done with all the musicians involved and had fun doing it.

LVL: We’re super excited for your return! What can people expect at Phase One on the night? Will it be your old stuff, new stuff or a mixture?

Fi & Niamh: Fiona Lennon will be opening up for us who we haven’t seen live before so we’re eager to catch her set followed by our mate Marvin Powell — a songwriter who never ceases to amaze us. We’ve never played in Phase One before and it seems to be a real buzzing venue so we’re looking forward to it.

We’re going to play a mix of all three albums but we’ll do the older heavier tunes more acoustic and laid back like the vibe of this new album. We have some other musicians joining us for our set who have been great to work with and again taken us out of our comfort zone.

LVL: What are your plans following this gig and the future? Will you work solely as a duo, work on more collabs or team up with the guys again? When can we see you play next?

Fi & Niamh: Right now we’re just enjoying the album release and super busy with it but we’ll definitely start getting the itch to write new stuff soon. We’d love to do some more collaborations in the future and look forward to seeing what comes up. We’ll be playing in Liverpool again on 31st July. We’re not sure how much we can say about that but watch this space — it’s going to be special! 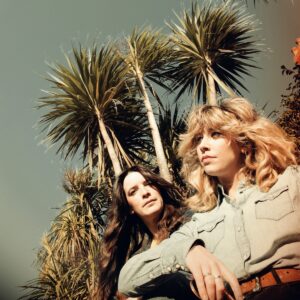 The Sundowners are playing a very special intimate gig at Phase One in Liverpool on Thursday 26th May 2022 from 7.30pm, with support from Fiona Lennon and Marvin Powell. The event is being hosted by EVOL and tickets are just £10, available from See Tickets — with the event likely to sell out it’s advisable to book as soon as possible.