HOUSE AND TECHNO BRAND PEACH BACK WITH A HUGE SUMMER PARTY!

Approaching its 7th birthday, Liverpool based house and techno events brand, Peach, is back with a bang after some time out! On Saturday 4th August, Peach are teaming up with WAV to host a huge summer day and night party with big hitters Pig & Dan and Saytek headlining. The day event (from 4pm) will see techno titans Pig & Dan take over the Blundell Street terrace following sets from Fidge and Dev1ant. Following this, bus transfer is available to the exciting new venue, WAV, for the night event (from 10pm) featuring MODU:LAR’s Brennan and UZU, Peach resident Fidge, Tom Moran and of course, Saytek.

Peach has developed a reputation over the years of being Liverpool’s best underground house and techno events brand — bringing some of the world’s finest DJs to warehouse parties and alternative venues across the city. From car park raves to boat parties, Peach has hosted some spectacular events and developed a cult following from those who truly know quality house and techno. Their fiestas have featured top DJs such as Guy J, Nicole Moudaber, Ben Klock, Carlo Lio, Sam Paganini and Nick Warren, whilst they have been responsible for showcasing the best local DJs and up and coming talent.

Having taken a hiatus, Peach is breaking its silence in style with this mid summer house and techno extravaganza with WAV! Expect a loud and lively display in the Baltic Triangle’s Blundell Street venue before the party moves to the dock road for a bass-heavy late one at Peach’s new home and Liverpool’s new clubbing venue — WAV. Daytime headliners, Pig & Dan, have had chart topping success and have been doing big things with the likes of Adam Beyer, Monika Kruse and Carl Cox, whilst the nighttime headliner Saytek has had support from legends such as Seth Troxler, Richie Hawtin, John Digweed and Carl Cox to name a few. 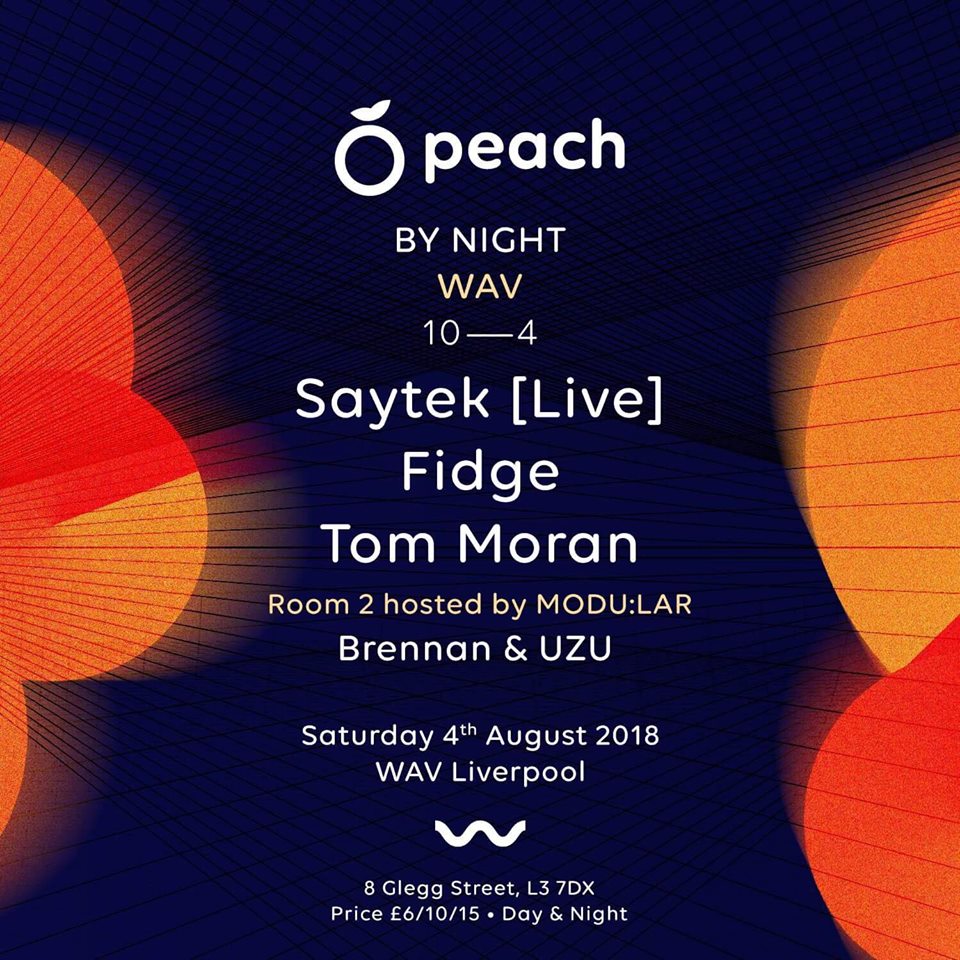 Speaking to La Vida Liverpool, Peach resident Fidge said: “Sometimes it’s good to take a break because you recharge your batteries and come back even stronger with a fresh approach. The Blundell Street venue is ideal for a big outdoor party and WAV is a proper underground venue — the way it should be — and both have massive VOID sound systems. We’re made up to be back and this party is going to be the start of many more huge events from Peach. We’ve got a great history and a big following and we’re ready to give our people some of the best displays we’ve ever put on!”

For anyone who has been to a Peach event before, this long awaited return is a must! For those who haven’t but love quality house and techno, this is also a must as it’s set to be one of the best parties in Liverpool this summer!