In this exclusive feature, we talk to SAS legend Rusty Firmin. With it being the 40 year anniversary of The Falklands War (Rusty was one of the key SAS figures) and also the 42 year anniversary of the Iranian Embassy Siege, in which Rusty led the famous SAS operation, it’s a historic time to interview this hero. 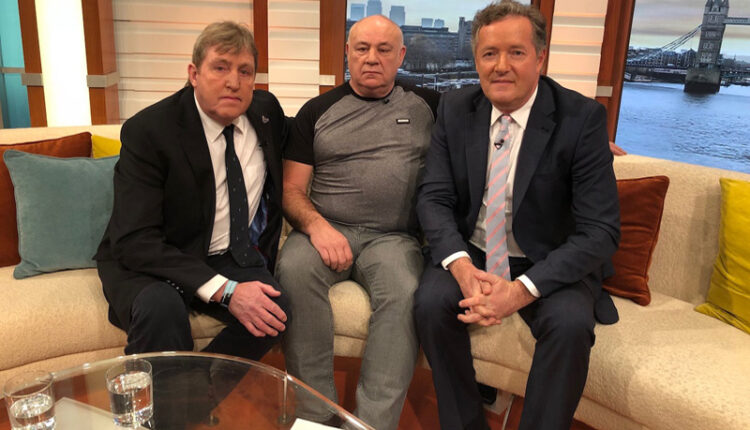 Now based in New Brighton, Rusty is a popular figure and is often quizzed by locals about his life and career. A representative of the British Army football team at top amateur level, top SAS Commander, Northern Ireland and Falklands War veteran, Iranian Embassy Siege hero, Stanstead aircraft hijacking consultant and security for the likes of Mel Gibson, the Japanese Embassy and others — it’s safe to say there’s lots to talk about. 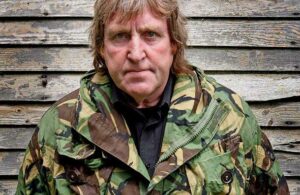 Such is Rusty’s legendary status, actor Jamie Bell portrayed Rusty in the 2017 movie about the 1980 Iranian Embassy Siege, 6 Days on Netflix. Now, in between touring the UK giving talks, Rusty is based in the Wirral seaside town of New Brighton — where he’s an integral part of the local community. Here’s our exclusive interview with him….

LVL: Tell us about your childhood and upbringing. Was a military career something you were interested in from an early age?

Rusty: “No, I wasn’t interested in a military career initially. I was born in Carlisle and lived there throughout my youth. I was adopted at 14 months so I must have pissed my mother off. I had very few friends and used to get bullied as I was quite small and bounced around home to home with different adopted family members. At the age of 15 I was made to go to the army as a junior soldier.”

LVL: What was it like joining the army at such a young age?

Rusty: “It was a complete shock to me. I was going downhill as a kid anyway. My father was ex-military and forced me down to the military office in Carlisle. I was made to take a physical and passed with flying colours. I was useless in school and all I wanted to do was become a footballer. When I did the army exam tests I thought I’d failed but I passed and I joined the Junior Leaders Regiment and the rest was history.” 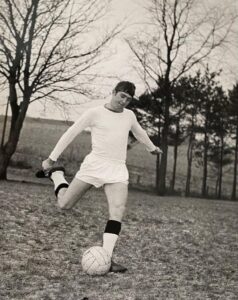 LVL: I understand you were a top football player in the British Army. How did that work? Did you play against other countries etc?

Rusty: “I wanted to quit the army at first and I think it was the football that kept me in. There was an Irish Sergeant who recognised my talent and asked me to train for their team. It was the first time I’d been recognised for anything. I became captain. I played for the Battery, the Regiment and eventually the British Army — the highest standard of amateur football. We played against teams in Belgium, Germany and other countries in tournaments and it was a great experience.”

LVL: What made you decide to take the leap and join the SAS? What was it like training to join the SAS? It must have been pretty gruelling right?

Rusty: “After a while in the Army I started to get itchy feet so I moved into the Commandos first by going to take the Royal Marine Commando course. I got my Green Beret and spent 3 and a half years in 29 Commando, still playing football, I decided to go for SAS selection. You don’t get picked, it was voluntary, and I embarked upon the 6 month gruelling course — most of the time on the Brecon Beacons.

The last week of the first month was ‘Test Week’ — with really hard endurance and physical tests. I was always fit so passed, even though it was very difficult. After a 42 mile test you were taken into a van and taken away to be told who’d passed, look at our times etc. There were around 20 who passed out of over 100 of us and those who passed went on to do jungle training etc. They basically kept whittling us down to find the elite.” 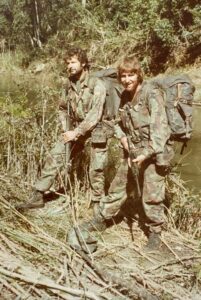 LVL: You’ve trained and fought all over the world. What’s the most difficult terrain you’ve ever faced?

Rusty: “Secondary jungle was particularly tough. You often can’t see in front of you due to the thick jungle so this where your navigation skills come in. During training your instructor is behind you assessing you. I trained in Botswana, Brunei, Malaya, many different jungles. Belize was possibly the hardest — as well as all the insects etc. you can’t see where you’re going. It was the hardest and dirtiest jungle of them all.”

LVL: What was it like serving in Northern Ireland?

Rusty: “Obviously there’s a lot I can’t talk about because the SAS operations were highly confidential. I started serving there as a regular soldier doing patrols but when I went there with the SAS it was all about covert operations. I had to blend in with people there so needed to have long hair, a beard etc. It was very dangerous being undercover and a lot of the time you were working alone in hostile situations but I made some really good Irish friends who I’m still friends with today.” 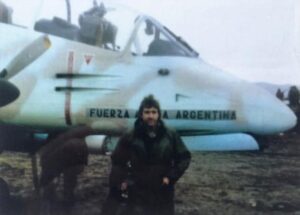 LVL: What was it like serving in The Falklands War?

Rusty: “Obviously that was very different altogether. I went in as SAS and our squadron’s job was to attack the mainland Argentinian airbases. Our mission was attack the airbases, find and kill the Argentinian pilots, destroy their missiles and find the remaining Super Etendard Aircraft and destroy them. We were then to escape to Chile. Our mission changed though as we lost 19 guys in a helicopter incident. It was a short war and soon finished before we got to do anything on the mainland.” 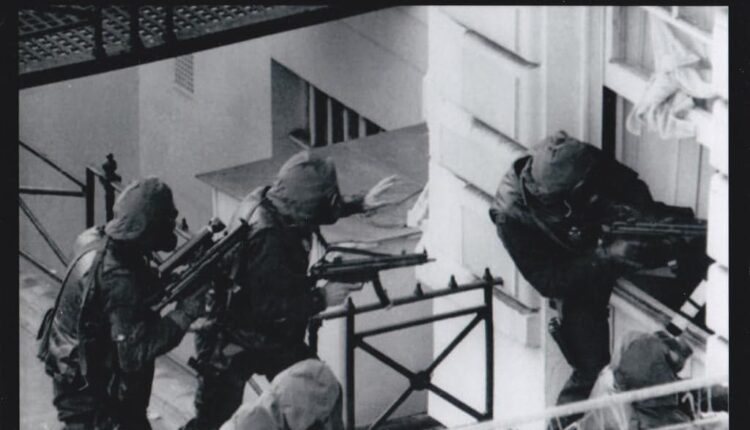 LVL: Please could you tell us about the Iranian Embassy Siege and what happened from that first day?

Rusty: “I’ve written a book about it called ‘Go! Go! Go!’ and as you know they made a film about it called 6 Days. It was a 6 day operation which started on 30th April 1980. The build up was plenty of planning and preparation whilst the negotiators kept the terrorists occupied for as long as possible and tried to ensure no hostages were killed. Max Vernon was Head Negotiator and did a great job whilst we arranged our Red Team and Blue Team.

There were 6 terrorists and on the final day there were 19 hostages left to save. Having done all we could and now having Proof Of Murder on British Soil (they executed one of the hostages and threw his body out the front of the Embassy) we were ready to go. We entered the building with the magic words of Go! Go! Go! — all with different tasks — and my job was to be Blue Team Leader for the back door entrance.

Nobody knew exactly where the terrorists and hostages were but we suspected the second floor. We worked quickly and cleared 54 rooms in 11 minutes and as we entered the rooms we then threw in flashbangs and there was lots of screaming. We killed 5 of the 6 terrorists and I found out afterwards that the guy I killed on the stairs was Faisal — the psycho who had executed Lavasani.”

LVL: You’ve been involved in security for some big VIP’s. What were those roles like?

Rusty: “Yeah I’ve ran security for the likes of Mel Gibson, the Japanese Embassy and done lots of other worldwide security. It involved training bodyguards and meticulous security. One mistake and someone could be dead. Guarding the diamond mines in Africa was quite a hairy role — being stuck in a different country in a high security role with no contact with the outside world. It was quite draining mentally and you had to be on the ball at all times.” 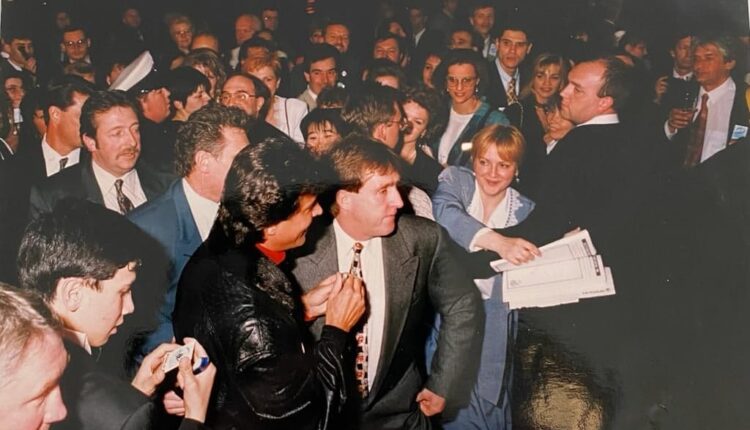 LVL: How have you found living in New Brighton?

Rusty: “I was based in Workington but an SAS veteran friend of mine asked me to come and visit. I got to meet Daniel Davies and learn about the Victoria Quarter regeneration project here. I thought it was magic and really fell in love with the area. I recognised Daniel’s passion for the local community and I’ve always wanted to help good causes so wanted to get involved and help spread the word about what’s happening here. From the street art to the independent businesses to the community — it’s amazing and I’d recommend anyone to visit.”

FROM A RAILWAY BRIDGE TO WORLD RECORD ATTEMPT FOR MENTAL HEALTH!